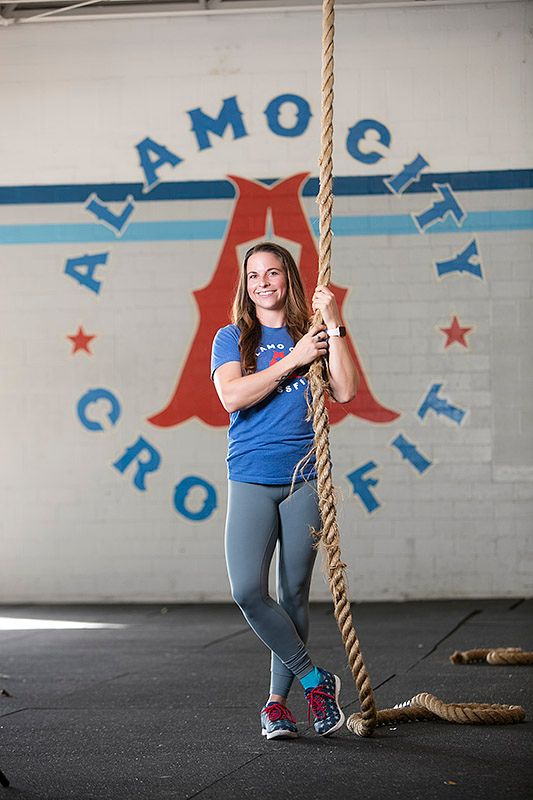 Connecting Our Community One WOD At Time

Community, connectivity and Coach Coley are three factors that are helping make Alamo City CrossFit (ACCF) one of the premiere CrossFit gyms in San Antonio. Located just West of Olmos Park & North of Monte Vista ACCF is incorporating practices like Yoga and a youth's "Barbell Club" to compliment their growing CrossFit community.

My first experience with ACCF was through my partner Kevin. Prior to becoming a founding member of ACCF four years ago he had never tried CrossFit, in fact when he told me he was going to give it a try I went into panic mode! At the time I hadn't tried it either but all I could think of were the horror stories I had read and been told about people getting injured.

With much hesitation I gave him my blessing to give it a try. I knew he was looking for his own fitness tribe, a group of people who would challenge and encourage him to excel---and that's exactly what he found! Kevin would come home so excited about the new skills he was learning and the people he was getting to know, it made me happy to know he found his healthy space.

Now that didn't mean I still wasn't worried but what started to put me at ease was the process ACCF uses to train their athletes. He explained to me how the coaches paid close attention to their movements and they practiced each movement of the WOD (Workout of The Day) prior to going all out. He explained how the workouts could be modified based on your skill level and there was no pressure to try things before you were ready. A few months later I joined him for a few classes and began to understand why he loves ACCF.

Coach Coley is not only a coach at ACCF but she's also an owner who officially took over the gym in December of 2019. In the few months she's been there she's taken some big steps to move the gym forward by hiring a licensed dietitian, incorporating a Yoga practice and has plans for some big renovations.

It's no easy task to run a business and continue to coach but Coley is doing it with precision and confidence. With Coley at the reins I'm excited for the future of ACCF.

Let's get to know this CrossFit coach a little bit more...

What Was Your First Experience With Fitness?

I used to train horses for movies like "The Walking Dead" and "Selma" and we had to be fit enough to run around movie sets and play an actors double. It wasn't much of an actual gym routine because we traveled so much, I also did yoga and utilzied workout videos.

I went to my first show when I was 2 and was in and out of globo gyms from the time I was 16 until I found CrossFit. I actually hated working out when I was younger and would wear my snow-boots on days we had to test our mile!

How Did You Get Started In The CrossFit World?

CrossFit started for me in 2015 when I drove up to a gym with a store front to see if the people inside were all super humans or if I would fit in.

I ended up joining right away and fell in love with the culture that a CrossFit community naturally has. I'm not sure what prompted me to start but I drove past everyday and always felt drawn to it.

When Did You Take Over ACCF and What Inspired You To Do So?

Mark and I took over ACCF officially in Dec but started the process in Sept. We wanted to create an environment for healthy people---a place for anyone that wants health, happiness and fitness in their life.

I get so much joy from seeing someone achieve their first rope climb or watching their journey to eating healthy whole foods. I truly love people, coaching, teaching and watching athletes grow into someone they couldn't even dream of.

There Are A Lot Of CrossFit Gyms In San Antonio So What Sets ACCF A Part from The Others?

We are not trying to set ourselves a part from other CrossFit gyms as much as we are trying to set ourselves apart from the Golds, Lifetime and the Orange Theory's of the world. I judge my classes not by who lifts the most weight but by how many people I have staying after class being social with each other. CrossFit health is what we live by for mental and physical health.

We now offer Yoga at very reasonable rates for members and non-members so all our athletes will see the value in non-stress moving, mobility and flexibility.

Hiring a licensed dietitian was a major move for our gym. There isn't a law in Texas stating that you have to be a registered dietitian to give nutritional information but at our facility it is required because we value years of going to school over an online coaches opinion of healthy eating.

Next we hired a physical therapist that is certified in weightlifting and running. He assess your movements, provides you exercises to help you improve, checks in and helps with dry needling.

We also just started a huge renovation in our gym providing the only youth "Barbell Club" with adult classes, there will also be a separate room for children, a retail space and lounge area.

Some People Are Afraid of Trying CrossFit because It Has A Reputation of Causing Injuries. What Would You Say To Someone With This Hesitation?

Well there was actually a huge lawsuit about this that was an open and closed case due to lying. On Dec. 4, 2019, Judge Janis L. Sammartino ordered terminating sanctions against the National Strength and Conditioning Association (NSCA) in the case of CrossFit, Inc. v. NSCA.

With this ruling, the court ordered the NSCA to pay CrossFit, Inc. $3,997,868.66 as a sanction and then terminated the case in CrossFit’s favor. The Court also awarded numerous issue sanctions that conclude the NSCA’s corrupt practices harmed CrossFit (while benefiting the NSCA) in the military, U.S., and international communities.

Of course within any organization there are injuries at the highest levels, there were 3 deaths just last month in cross country riding. Also how many concussions in the history of football caused their players to have a shorter life span? Do your research before starting a facility of any sort, see if the staff is certified and if they get continuing education.

How Has Your Relationship With Fitness Changed Going From A Trainer To An Owner?

My relationship with fitness changed when I went from trainer to owner so much more than I would have thought. I started out training 5 days a week going hard and heavy in the gym with some mobility work thrown in when I was hurting.

Now I look at things from a different angle and know that I don't ever have to hurt. If I have a stressful day I don't do CrossFit because my body doesn't know the difference between one type of stress from another, so instead I practice yoga.

Working out is more of a mental release and de-stressor. I have learned that not everyone that walks in the door is mentally capable of giving 100%---them just making it in is enough to win today's battle.

I'm Excited For The New Additions You Mentioned. Is There Anything Else Coming Up That You're Excited About?

We are offering shorter noon class on Mon/Wed/Fri for 45 minutes with a 1 hr option for our working peeps. There are also new community events every month lead by a staff member, this month there will be a bike ride at the Missions!

In Addition To CrossFit Are There Any Other Forms of Exercise You Incorporate Into Your Routine?

I love to incorporate any kind of exercise I can get my hands on! One of my favorite mottos is "You don't CrossFit to CrossFit, you CrossFit for life and other sports". I love mountain biking and taking cycling classes. Of course horseback riding is a favorite and I'm getting into golf.

Are There Any Other Forms of Exercise You Haven't Tried That Interest You?

I would love to try barre and pilates one day.

Working out doesn't have to be difficult or a punishment, find a gym or sport that you like and move your body everyday!

Where Can Our Readers Find You?