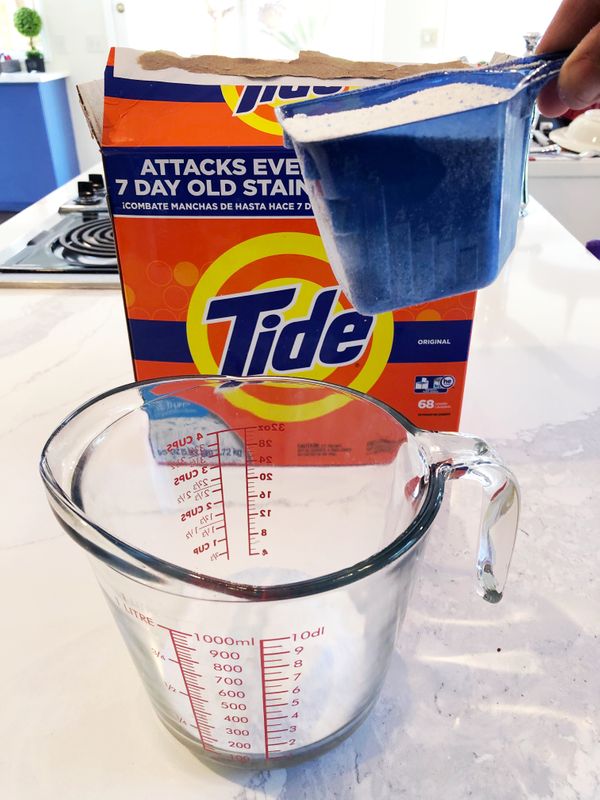 Stripping It All Off!

One of my favorite things to do is sweat. Whether it's from a workout or working in my garden, nothing boosts my spirts quite like the achievement of feeling perspiration running down my face. However my sweat needs to collect somewhere and that's usually on my clothes leaving them smelling not so fresh.

Despite most athletic wear lines having their own versions of anti-odor technologies incorporated into their clothing, they just don't seem to work or last for me. I'll admit my athletic clothes take a beating, some get worn on a weekly basis and are left in a portable laundry bag for hours until I can get home and put them in the wash. So it doesn't surprise me that I can't get the stink out of a few pieces that I've had for over 5 years.

I've tried pre-soaking them in the washing machine, using anti-odor sprays before/after each use and a variety of expensive sport laundry detergents that just didn't do the job. I almost lost all hope and threw away some of my favorite pieces until a co-worker sent me a DM that would solve all my problems!

She sent me a link to a process called "Laundry Stripping", this is where you mix your athletic wear, towels etc. in a tub with hot water and a variety of powder detergents for several HOURS to remove any blockage from the pores of your clothes. The blockage is caused by sweat, body oils, excess laundry detergent etc. that has built up over time.

I was very skeptical about the process but since I had nothing but time on my hands I gave it a shot and was shocked by the results. Here's a break down & video of what I did and saw---let me warn you, it's not pretty!

2. Fill Your Bathtub With HOT Water

4. Photograph The Water Because You'll Want To Compare It To The End Result :)

7. Mix Water and Clothes Once Every Hour

8. Examine How Dirty The Water Is & Then Drain The Tub

9. Add Clothes To Washing Machine & Run Through a Rinse or Wash Cycle With No Detergent.

After the 4 1/2 hour soaking I could see that the formula did release a lot of excess build up from my clothing, BUT I wasn't going to believe the process worked until I put some of my notoriously smelly pieces through a workout to see if any of the aromas would come out.

Y'all they smelled clean after the initial workout and they're still smelling fresh weeks later! I can say the entire process was worth it and I'm excited that I don't have to get rid of some of my favorite pieces.

If you're having the same issue with your clothing or towels give this a shot, I'll definitely be doing it again!