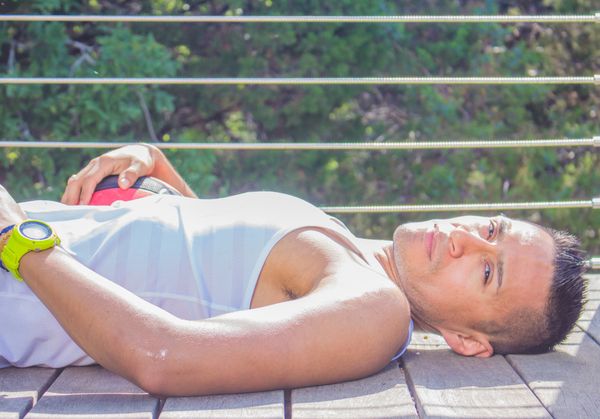 The Strength To Rest

You know that feeling of invincibility you get after running six miles in the blazing Texas heat or increasing your weight on the squat rack? Well, that’s the feeling I had a few years ago. From 2015-2016, I was extremely focused on my diet, I was beginning to see definition and muscle growth on my body, and I felt like I could conquer any new challenge. I was juggling a lot back then: strength workouts, training for the MS 150 and a half marathon, teaching at JoyRide, and working at my full time job. I was functioning on about six hours of sleep per night, and my body was holding up like a champ----or so I thought!

In October of 2016 I participated in my 6th MS150, and I realized something was “off.” I felt fine during the ride itself, but when it was over I felt like my body was breaking down-- preparing to crash. I felt light-headed, I was nauseated, and I had a headache that lasted about 12 hours. All I wanted to do was sleep. The next morning, however, I felt normal again so I assumed I was suffering from exhaustion or maybe even dehydration. Even when I had the same experience following a half marathon two months later, I pushed it aside and kept moving forward.

As we entered 2017, I started to feel lethargic during the day and it became hard for me to stay focused and motivated. Not only did I mentally and physically feel “off,” but my mood was affecting my relationships with my family and friends. It got to the point where all I wanted to do was sleep. I didn’t want to go anywhere, I lost interest in working out, and I just felt burned out in general---that’s when I thought I might have a more serious problem than just fatigue.

It was hard for me to admit that something was wrong-- I mean I’m Superman and he doesn’t quit! As a personal trainer and fitness instructor it’s my job to be a source of inspiration for my clients, and I felt like I was letting them down. The guy who’s supposed to be a source of motivation couldn’t even motivate himself to get to the gym.

I shared my concerns with one of my best friends, who recommended that I visit her doctor and get a thorough physical examination to figure out what was really going on. That was a turning point for me. My tests revealed that I wasn’t allergic to anything, and my blood work was almost perfect. So what was the cause of all my lethargy and burnout? My testosterone levels were extremely low due to-- you guessed it----lack of proper rest. It turned out that six hours of sleep wasn’t enough time for my body to recover from the amount of activity I was putting it through.

This diagnosis was a relief on one hand because it was something that was easily fixable. But just because it was easily fixable didn’t mean it would be easy for me to fix. I’m the type of person that gives 100% to anything I decide to do. If I believe in something, I will push until I make it happen and succeed. My determination is a strength-- but it is also a weakness. It’s hard for me to find the balance I need before I push myself off the edge.

One of my favorite quotes is, “If you want to be around to take care of the ones you love, you’ve got to take care of yourself first.” I realized that I preach these words to my clients, but I wasn’t living them myself. I needed to make a change and find the balance my body was craving.

Over the next few weeks I cut back on my workouts, made myself sleep in, and focused on the foods I was putting in my body. After about three weeks I noticed that I was starting to feel like my old self again. My mind was clearer and my motivation returned. The changes were encouraging and they inspired me to take six months off from any serious training and focus on creating BodyArchitecture. The experience was scary, stressful and difficult but I’m grateful for it. I realized that I’m not Superman--and that’s okay.

Don’t be too proud to listen to what your body is saying and take a day (or more) off when you need it. Ignoring the problem will only make it worse. I leave you with a quote that summarizes what I’ve learned: “Strength is about more than physical ability. Real strength comes from listening to your body, understanding what it needs, and knowing when to rest. That takes confidence.”